Nissan Kicks will be get 1.3 L turbo petrol engine with more power and torque than Creta and Seltos

Another engine that will be added to the lineup will be 1.3 litre HR13 DDT turbo petrol engine with 154 BHP and 254 NM, output figures being even better than Creta and Seltos with power and torque of 138 BHP and 242 NM.The turbo BS 6 petrol engine offered in Kicks will get 6 speed manual and 8 speed X-Tronic CVT option.Renault Duster will also get the same engine in BS 6.

This new engine is co developed by Dailmer and also powers a number of Mercedes Benz, Nissan and Renault cars.

Also, Kicks currently also gets the option of 1.5 L K9K dCi Diesel engine trim which will not be upgraded to the BS 6 emission standards.This mill puts out 109 BHP @ 3850 RPM and 240 NM @ 1750 RPM of torque.It is available with 6 speed manual transmission option.This engine will be replaced by the new 1.3 L turbo petrol engine.

The 1.5 L petrol engine will be available across the base and mid trims while the new powerful turbo engine will remain limited to only top spec fully loaded variants.

The SUV is highly feature rich.The equipment list includes 360 degree camera, automatic air conditioning, cruise controls, ABS, hill start assist, 4 airbags, leather seat upholstery, 8 inch touchscreen infotainment system with Apple Carplay, android auto among others.It will get a number of new features to establish its position well in the segment including connected car technology.Along with the features update, some tweaks will be made to the interior and exterior as well to keep it up-to-date.

Nissan Kicks competes with the likes of Hyundai Creta, Kia Seltos, Renault Duster and lower models of Tata Harrier and MG Hector.Nissan India will be entering in the sub compact SUV segment in the next few months with its Magnite SUV which will not be competitive but will boast certain class leading features as well.

Nissan Kicks has been a feature rich vehicle but the SUV has been not been able to garner that much interest among the customers and has been averaging around 500 units per month.With the introduction of new petrol engine and certain interior, exterior updates, the SUV will be looking to pull more customers. 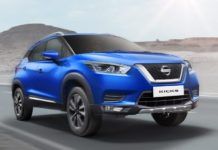