Honda City has a got a rival from Toyota in the form of Yaris. Both of them are highly feature rich cars and here is a comparison of both the sedans:

Honda City 2020 vs Toyota Yaris Dimensions Comparison – Which one is bigger?

Honda City is the most spacious car in its segment while being better than Yaris in most of the technical aspects.

Honda City is much more inclined toward providing a premium look with those stunning LED headlamps and Z-Shaped LED tail lights as well. Wheels are borrowed from RS 1.0 variant of the Thailand spec sedan.

Toyota Yaris has more of a sharp and stylish exterior than the premium one. It gets a big lower end bumper incorporating air intakes. Creases flows loaning the bonnet and from the front fender to the rear door handle. Tail lamps are LEDs and looks edgy.

The City has always have a great cabin experience and 5th gen City is no different. Sporty steering, premium design for ac vents and all others elements are made to provide a premium experience.

Toyota Yaris’s cabin makes use of a lot of silver elements and as compared to the New Honda city, the interiors are a bit dull. Infotainment system is retractable and has ac vents below it.

Toyota Yaris as well as Honda City has a similar petrol engine but Yaris doesn’t have a Diesel engine in the lineup.

Honda City gets 1.5 L I-VTEC engine (119 BHP / 145 NM) with 6 speed manual and CVT while the Yaris also offered with the same transmission options with slightly less output figures of 106 BHP and 140 NM.

*We haven’t compared the Diesel engines of the sedans since the Yaris misses out on the diesel mill.

Honda City vs Toyota Yaris – Which is more feature rich?

Honda City vs Toyota Yaris – Which has more safety features?

Honda City vs Toyota Yaris – Which sedan has the best build quality?

Honda City is based on ACE body structure while Yaris is underpinned by Toyota B Platform with which it scored 5 stars in ASEAN NCAP with 7 airbags and 4 stars in Latin NCAP with 2 airbags.

Honda City is among the top sellers in the segment with an average monthly sale of 2,500 units per month while the Yaris struggles around 700 units monthly.

Honda City vs Toyota Yaris – Which is more value for money?

The petrol-only Yaris is priced between Rs. 8.86 Lakhs and Rs. 14.3 Lakhs while the Honda City which both the transmission choices is expected to fall between the territory of Rs. 10 Lakhs and Rs. 16 Lakhs (Ex Showroom).

Why Honda City is better than Toyota Yaris?

Why Toyota Yaris is better than Honda City? 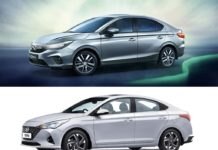 Toyota Yaris 2018 Variants Explained:J vs G vs V vs VX