Kia Seltos is the new entrant in the segment and it is only in its debut month that the feature loaded SUV has taken the segment by storm.It has created a record by selling massive 6,236 units in its first month, August 2019.Hyundai Creta which has always been a top seller for a number of years has now finally got a perfect competitor.Also Read:Kia Seltos vs Hyundai Creta Comparison

The overall sales of Creta has been coming down from the past few months from 12,000 to 10,000 to 8,000 and now it goes down to 6,001 units in the month of August 2019.In terms of sales in August, Seltos have beaten each and every competitor of its segment.

Seltos was one of the much anticipated cars to be launched in India in 2019 and it did stand unto the expectations.On the first day of opening of official bookings of Seltos, is has received more than 6000 bookings within just 24 hours.

Kia has received a lot of bookings for the SUV and there are a number of reasons for the same as well.Kia Seltos comes with BS-VI compliant engine options and the best thing is that all this engines are offered with three different types of automatic transmission.

It is great to see Kia Seltos and other such cars performing so well at such a time when all the carmakers are receiving massive decline in their overall sales.Even MG hector has been doing quite well since its launch 2 months back in India.

Kia Seltos or Tata Harrier which one to buy 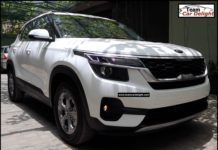 New Grand i10 to Tata Altroz-Upcoming Cars in India in August...